The entrance to the Guadiana is not easy. There are a few buoys marking the channel, but the sandbanks often shift after heavy weather/rains and you never know if the buoys' positions have been adjusted accordingly. Heavy swell makes entering/leaving quite adventurous. Crossing the bar at LWS with a 2m draught boat could well be impossible. We marked three positions when entering one time where there was sufficient water for our 2m at LW neap:

Two miles inside there is Vila Real de Santo António marina on the west bank (Portugal) and another mile further is Ayamonte Marina on the east bank (Spain).

The Guadiana is tidal and the current can run quite fast, though not as swift as the Guadalquivir.

Five miles up from the river entrance is a bridge with an official height of 18 meters in C-Map and of 20.5 in the Imray pilot. We know boats with a 20m mast have cleared it alright. When one sails with the tide, the bridge will be passed near low water anyway, which will give more clearance.

There are no electronic charts and no channel marking buoys north of the bridge. The depths can be more than 20m in places, sometimes right near the shore. Safest water is on the side of the steepest bank. There is a shoal well out to the middle of the river in the first bend just above the bridge on the east side. Tributaries often have a gravel bank on their south sides. The biggest is the one at Alcoutim, just north of the pontoons, which will actually dry to nearly the middle of the river at LWS. South of Pomarão is a sandbank on the west side, then a rocky patch on the east side, where navigating gets tricky. Even trickier it gets near Mertola, but we know boats of 2.1m draught have gone there (and we know boats of lesser draught getting badly stuck). See charts below (with thanks to Morvargh a.o.). Note: the ravine at the top right on the first sketch is now filled.


Anchoring can be done just about anywhere. The holding is fairly good in muddy sand but there are many gravel patches. Experience will show where the current runs strongest and where the most debris gets caught in the anchor chain. “Caña”, long pieces of reed, can be quite a hazard. Large rafts of them can wrap themselves around anchor chains and cause boats to drag. Beside caña there are (semi)submerged logs and the occasional dead sheep to bump against the boat or get in anchors or chains. As the river is tidal, the four times a day change of direction may cause anchors to break free and mooring lines to get tangled. There is no swell once around the first corner, but wind against tide can build up a chop and make anchoring uncomfortable. Getting ashore by dinghy is not easy when there is no public pontoon available especially not with an inflatable dinghy.
Swimming is being done in the river, but the current, debris and the colour of the water don't make it attractive. In the summer months there is an official swimming area with a beach behind a sluice in Alcoutim.

There are several floating pontoons where one can tie up alongside, though generally not alongside other boats:
Quinta do Vale golf resort: Space for about 4 yachts. No water or electricity. There is a very shallow patch just south of the pontoon and there are funny violent counter currents, but alongside there is 5m water.

Laranjeiras: Space for 2 or 3 yachts, half of the pontoon can be reserved for tourist boats. Water and electricity.

Alcoutim: 3 pontoons, the southern one has room for 4 or 5 yachts, the middle one is not for yachts except for maybe an hour or so, the northern pontoon has space for 3 or 4 yachts on the northern part and the southern part is used by the ferries. On Sunday mornings in the summer months a large cruise ship will take up the middle and most of the northern pontoon. Water and electricity, except on the middle pontoon. Showers, which are public and can be used also by cruisers at anchor.
Sanlúcar de Guadiana (Spain): Space for 6 or 7 yachts. Water, electricity and showers.

Pomarão: Some space for yachts, don't know how much. No electricity, but there are public showers.
Another pontoon is at Penha de Aguia, about halfway between Pomarão and Mertola, and in Mertola itself, but we have no further information, yet.

Quinta do Vale golf resort, no charge, but they might send you away.

Foz de Odeleite: unknown, could be free.
Alcoutim, Guerreiros do Rio and Laranjeiras all belong to the municipality of Alcoutim: up to 11m € 7.50 per night, above 11m € 10 per night. In the second week the prices double and after those two weeks one has to leave for at least one night after which one can start with a fresh week. This system gives everyone an opportunity to spend some time on the pontoon.
Sanlúcar: € 7 per night and one can stay indefinitely, which makes it hard to get a berth.

It is possible to rent a mooring buoy at Foz de Odeleite and at Laranjeiras for € 3.50 per night.

Shopping: Nothing much, it seems at first, but the “supermarkets” sell a lot of things if one searches long enough or asks. Two small supermarkets at both Alcoutim and Sanlúcar, plus a “market” in Alcoutim on Saturdays when there is a vegetable van and a meat van. On various days and various hours there are vans selling bread, fish, frozen food, clothes, furniture and maybe much more, but it is a matter of finding out when and where exactly. The other villages have no shops, but some vans stop there. Except for fresh fruit, veg and bread the prices are higher than on the coast, sometimes by 20%.

Wifi is available at the library and from the Riverside Tavern in Alcoutim, and from the library (social centre) in Sanlúcar. Around Alcoutim and Sanlúcar there is Portuguese dongle reception but in many parts of the river there is none and also the mobile phones often don't work. The dongle can be uploaded at the post office in Alcoutim.

Transport: Don't hope to travel on holidays or in the weekend. From Sanlúcar a bus leaves at 7:00 for Huelva and one can change buses for Ayamonte at Villanueva de los Castillejos.
For Alcoutim buses see the file below.
There is also a bus between Pomarão and Mertola twice a week.

Fuel is not easy to get, the nearest fuel station in Portugal is 7 km away and in Spain 10 km away in El Granado.

For wintering the Guadiana makes a change from marina life. The scenery gets nicer the further upriver one goes, with the hills getting nearer and higher and lovely green once the rainy season starts. There are several liveaboards wintering near Alcoutim and Sanlúcar and there are even more ex-liveaboards who have settled ashore. Some people leave their boats at anchor or on a mooring, which usually turns out safe enough. However, there can be very heavy winter rains when it can happen that the flood current cannot overcome the ebb for several days at a stretch and the water level rises by several metres. Then the debris is an extra hazard. When the water level rises real high, the pontoons have to be vacated, sometimes at short notice.
The climate is also different from the coast. Rainfall is usually heavier and more often, the nights are generally much cooler and each winter there are several days with frost and often a persistent fog which makes it even more uncomfortable. But when the sun comes out in the afternoon it is the more enjoyable because it is less windy than on the coast.
Social life is what you makes of it yourself. There is usually a get together on Friday nights and on Saturday markets, and barbecues when the weather is fine. The local schools welcome cruisers children. There is enough to read for a long wet winter from Jean and David's book swop in Sanlúcar, Spanish lessons are provided by the government, totally free, there is fitness and aerobics, and of course there are lots and lots of wonderful walks along the river and further inland. 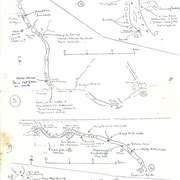 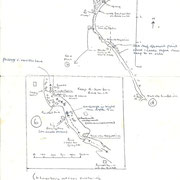 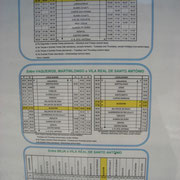