Upon arrival in Almerimar we noticed our enginewater coolerpump was still leaking quite a bit, despite the new impeller, so the engineer decided not to postpone until Gibraltar getting the other necessary spare parts, but to order them right here and now and so the next day we went over to the chandler. Because they expected it would take some 10 days to deliver (unless ordered express at great expense) we thought we might as well do some more ordering of boaty things. Much to our astonishment the pump parts were here already after 3 days. But now we had these other orders to be delivered still....

And so we just had to make the most of our stay here.

It was nice to see several people we'd known from our winter here in 2009/2010 and to catch up with all the latest news. A bit sad though to see several boats still here and obviously not been attended to at all since then. We heard there had been not so many liveaboarders this winter compared to when we were here, but there had been a nice lot of social activities going. What a shame there hadn't been those Spanish classes, aerobics and Flamengo dance classes the year before!

In the computer store where we'd bought a new laptop last year, we now ordered a new netbook. I'd been getting quite nervous with having only one out of three laptops functioning, so life is a lot more relaxed now. And so I've been kept quite busy getting the new thing set up with the same programs and configurations as the other one.

Have a look on our other website: http://eos1932.jimdo.com/history/restoration-1989-onwards/, I uploaded lots of pictures with the help of wifi from the café opposite.

Some months ago we had downloaded Open CPN, a new (to us) navigation program and on which we could use our new GPS mouse. I had been quite proud of myself to get it installed so easily, but just before leaving Cartagena I checked it again and the charts opened up alright, but I didn't manage to connect the GPS. Very annoying, also because we now don't have a laptop with XP anymore and we still don't know how to run C-Map under Windows 7. Finally I gathered enough courage to open the Open CPN manual and dive into it. Starting at the beginning I downloaded the driver, instead of installing the CD, like they recommended, and several clicks later: hey presto! we could see ourselves moored in Darsena Uno! But we had disappeared from the screen once more after restarting the computer! However now I was so clever to first plug in the GPS and then start up Open CPN.... Or is it that I was just stupid not to have tried that before....

Summer was in full swing by now and our berth in Darsena 1 was a very nicely protected spot in winter but just too hot in summer. So my tan started to fade while spending many hours under the cockpit awning or inside under the windscoop. I had re-made the windscoop into a 4-sided one, so we would get a flow inside no matter the wind direction. And it works wonderfully! Such a difference to have an added wind chill factor.

We did some boat jobs, but not too many and not too energetic. Peter got the enginewater coolingpump in order again and also the outboard engine, spent a whole day servicing one of the paraffin burners and I did several loads of washing, went to the hairdresser and walked to nearby Mercadona nearly daily to stock up on beer and wine and other essentials.

In our continuous quest for mosquito repellents we came across a nice little ultasonic device which works on a battery and apparently sends off a signal which in turns sends off the mosquitos. And it works! For when in port and plugged into shore power we have a device which spreads anti-mosquito fumes, but without 220V available this ultrasonic thing is a perfect alternative.

It was nice to see how the Spanish celebrate San Juan on the 23rd of June: every one flocks to the beaches in the evening to make huge bonfires and have barbecues and good fun the whole night long.

And when all the parcels were delivered we just had to wait for the wind to turn... Why are there so many westerlies while the winds should be predominantly easterly in summer? Last year when going the other way we were fighting our way against the easterlies. Well, nothing you can do about it but wait, if you want to stick to the adagium "a gentleman doesn't tack". 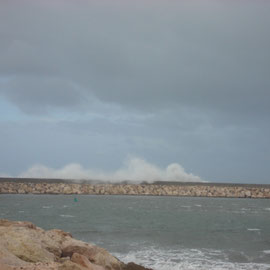 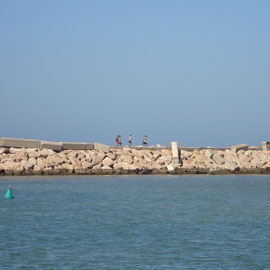