Along the Costa del Sol

Finally the wind came from where he should be blowing predominantly in summer and so finally we said Goodbye Almerimar.

The forecast promised two days of perfect 10 to 15 knot easterlies which would make for a couple of nice sailing days. We set off across a lumpy cross swell over the shallows in the bay of Almerimar but it soon improved when we got to deeper water. The 3-4 Beaufort easterly made for a nice relaxed sail... for about an hour. And then got less and less. Just when I thought "when the speed gets under 2 knots...", Peter said: "when the speed gets under 2 knots..." And so we continued motorsailing, leaving the Costa Plastica behind us, but also the nice view of the snowy Sierra Nevada. Nothing much to see this trip. Only 5 other yachts, no dolphins, no flying fish, no fish floats (which is good news of course), just a few young gannets and once a flip-flap fin of a sunfish. 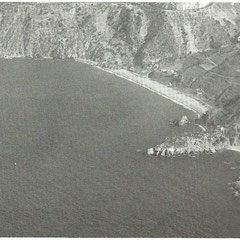 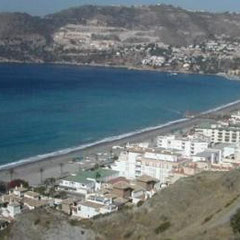 It is one of the very few anchorages on this stretch of coast and even though the water turned like a mirror, there was still a slight swell coming in which rocked us quite a bit.

We thought of spending the next day at anchor there, but the forecast was still optimistically for east winds and for not much wind the day after that, so we decided to "sail" on. Which turned out at first motoring against a very light westerly and then motoring in a (not so very flat) calm. We never even had a staysail up! Oh well, better no wind than a contrary wind.

Lots more traffic today: we counted 10 other yachts under way. But still no dolphins. The occasional empty coke tin, but on the whole the sea was rather clean, much more so than you'd expect from a tourist coast.

We contemplated anchoring off for the night somewhere, but there was not a bit of headland anywhere. We suspect that being so near the Straits the tides make for a non-stop onshore swell even on windless days. So we treated ourselves to a good night's sleep in Fuengirola and once moored up we were quite glad because the water was never still even inside the harbour. And soundly I did sleep: a mosquito bit me in my ear! (forgotten all the anti-mozzy devices)