Getting away from it all (?)

One of the great things of the Guadiana is that you can move about and choose a different scenery without having to go to sea – and so no need to stow all the clutter lying about. Also, for getting “away” you only need to go just around the corner. One of the nicest hide-outs is the anchorage at the Vascão, where we decided to park Eos for a change of view.

However, this time we didn't have the place to ourselves. Three nights we stayed and so did several other boats. One we had met before, in Culatra last year, and so at least it was nice to meet up again.

We then moved on to Pomarão, where we took the pontoon on the opposite side from the village, an even quieter spot than the village pontoon. The Guadiana being quite narrow there it's just a short dinghy ride across to catch the bread van, the vegetable van, and this time also to visit the cafe where they'd recently installed wifi. There is no electricity and water on the pontoons at Pomarão, but we took our laundry to the old washing place. 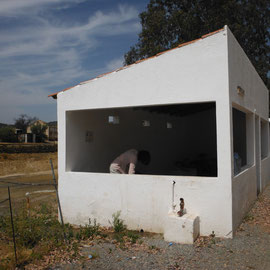 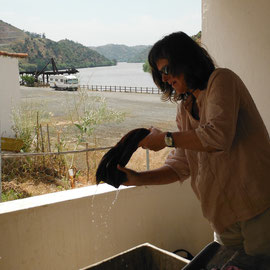 We enjoyed a couple of warm sunny days and then we got reminded again that is was only spring. Really strong winds, rainy and cold, so we were happy to still have the winter duvet on our bed.

We planned to do a cycle trip to visit people in Sedas, a village some 10 km away, something we hadn't managed last time we were moored in Pomarão because of a broken bike pedal. This time we started off, but just around the corner before even reaching the top of the hill, Peter literally got blown off his bike, into the ditch. His landing on the unpaved road wasn't very gentle and he was dripping blood from several cuts. Nothing really serious but it looked real spectacular and yes, I did take a picture but no, won't show it here! The good thing was that it happened just a short distance from the boat. In the next days we only went ashore for walks....

Most of the flowers had disappeared, but there were still some new ones brightening up the drying landscape. 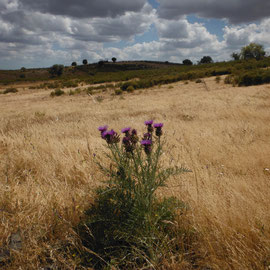 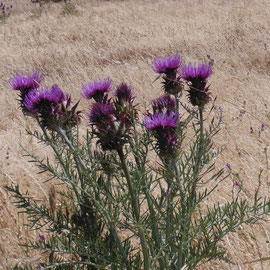 Birds are a lot more difficult to capture on photo, obviously, except for these: 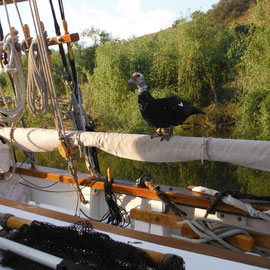 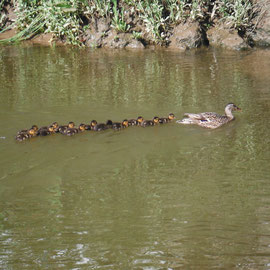 Okay, I take a picture of you but then you'll have to get off!

Aren't they cute. And why are there so many? Well, a few days later there were only two left.

Eos gets visited regularly by swallows, wagtails and once even a sparrow inside on the stairs. The Guadiana is a good place for bird watching – and listening to them as well; the nightingales and oreoles kept it up all night and day. Other birds we spotted or heard were bee eaters, hoopoes, blue magpies, finches, woodpeckers and storks. There are not so many white herons this year but we did see a squacco heron. Also there are often cormorans, whom we hadn't seen here before in other years. (Voor de Nederlandse lezertjes: zwaluw, kwikstaart, mus, nachtegaal, wielewaal (dudeljo, inderdaad), bijeneter, hop, blauwe ekster, vink, specht, ooievaar, witte reiger, ralreiger, aalscholver.)

Another visit we got was from the Portuguese navy, maritime police, customs and what have you, more than ten people in an enormous RIB. Usually, check-ups on the Guadiana are just boatpapers and passports, but these guys also wanted to see our flares and fire extinguishers. It so happened I'd had a look at them myself just the week before and had taken the out-of-date flares out of their container and had noticed that our home-made expiry stickers had become unstuck from the extinguishers and also that one of the extinguishers had the needle in the red. The inspection guys noticed the arrow as well of course and they also started to moan about our less than a year ago newly bought extinguisher not having an expiry sticker. Anyway, they didn't say anything about our too small amount of flares and only checked their dates, but we did get a lecture on how they should be within easy reach and how the container should be easy to open. We didn't argue that it is an official Distress Signals container, but admittedly the lid is of a rather large and awkward size. Later we heard from another boat that one of the inspection guys had shown (shown off I suppose) how to set one off; just let one fly without there being distress and regardless of fire hazard!

Well, we stayed friendly, they acted friendly enough, but we were told that this time there was no problem but we did have to get our extinguishers fitted with an expiry sticker. So even in Pomarão you can't get away from it all!

We had wanted to explore the Guadiana a bit further upstream, but figured it would be better to get our extinguishers sorted out first. On our way back to Alcoutim, just South of Pomarão where there are some sandbanks and rocks, Eos went bump-bump.... but according to our GPS we were on the right track! Well, we didn't get stuck and anyway we were moving with a rising tide, but maybe the sandbank had shifted after all the flooding.

In Alcoutim we took our extinguishers to the Bombeiros, the fire department – quite a struggle walking up the steep hill and now in hot weather, but they couldn't do any filling, checking or testing. They didn't even know where it could be done but after several telephone calls they gave us an address between Olhão and Faro. Meanwhile, there were other boats who'd had the same problem and one had a friend with a car and so our extinguishers got taken along as well. To Isla Cristina, so the Spanish are benefitting from the strict Portuguese regulations! However, it was going to take several weeks to get them back and so we didn't move back upriver again.