One good thing about all the rains: it brought out lots and lots of flowers.

And another good thing was that we'd postponed our haul-out. We'd planned to go to the yard in April, but we figured autumn would be a better period so the boat wouldn't dry out too much while on land. Also, this year we didn't want to miss all the spring flowers, and we were rewarded with plenty of them. We went for several walks in the hills around here and I set my new camera to work. 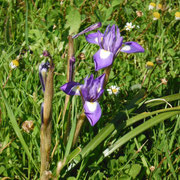 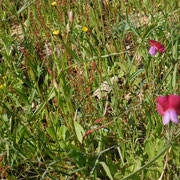 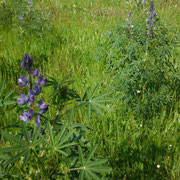 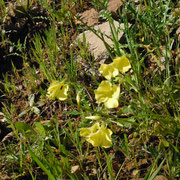 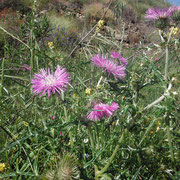 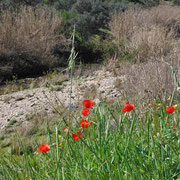 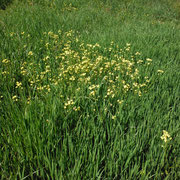 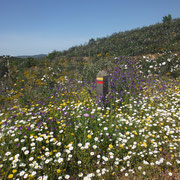 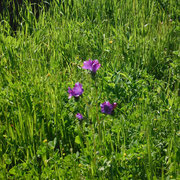 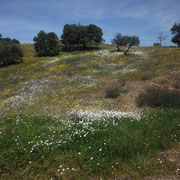 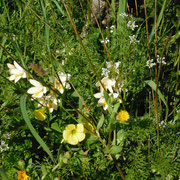 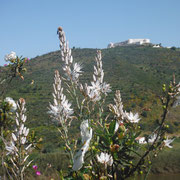 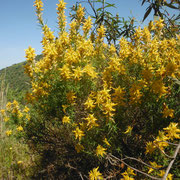 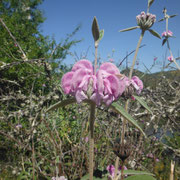 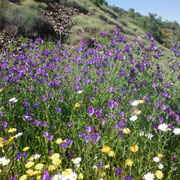 A disadvantage of all those flowers was a high bee activity. On one of the walks I got stung on the top of my head. We must have been right in their flying zone, because two other people of our walking group got stung at the same time.

I did a short visit to see the family in the Netherlands – fortunately the floods had receded by then otherwise we would have had to move down to a marina at the mouth of the Guadiana, where the high water and strong current were much less – and came back to glorious weather with blue skies and temperatures between 25º and 30º so we dug out our cockpit awning to get some shade.

But it didn't last and soon we were reminded that it was only spring by a sharp drop in temperature for several days and the next weeks it was as variable as could be. We'd already buried our chimney somewhere deep down in the forepeak and instead we lit the oil lamp and candles for some warmth and a week later we were hiding under the awning again and getting annoyed by mosquitos and spiders.

Labour Day is quite a big thing in Spain and Portugal. In Sanlúcar however, nothing much happened, but in Alcoutim there was a marquee on the quayside with rows of tables for people to enjoy their lunch which was either brought or bought from the barbecue. Some families had brought enormous picknick feasts and their own nice tablecloths. Others had just spread out newspapers. On one of them I noticed pictures with lots of orange: it turned out a whole page of a Portuguese newspaper was used to report about the coronation of the new king and queen of the Netherlands the previous day. Which meant I hadn't been able to avoid the orange mania completely...

While all this eating was going on there were various musical performances, a.o. a Portuguese folkdancing group and a Spanish flamengo group. It still amazes me how different the musical traditions can be of two such close countries.

But Sanlúcar did its best the next weekend with the yearly Romería, which is a get-together where everyone dresses up in the traditional flamengo outfits, the women in their polka dot dresses and the men in stylish horseman outfits. Lots of horses are rented for the occasion and the people ride and walk in a procession to an area some five km away where they meet up with the procession from El Granado, the next village. A Romería is partly religious, it has some gypsy elements and possibly in the past it was used for horse trading and of course it could have been called – and likely still is – a wedding market. The people walk around, many men spend hours just sitting on their horse and then all have lunch in their casetas, a kind of tent. Nothing much seemed to be happening except eating, drinking and chatting. To me it would have looked nicer if the tents were closer together with a separate parking space, instead of having all the cars just standing around spoiling the picture, but the people didn't seem to mind this mingle of tradition and modern conveniences. 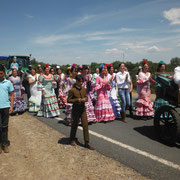 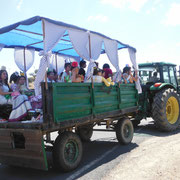 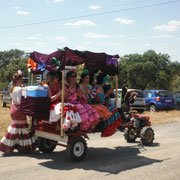 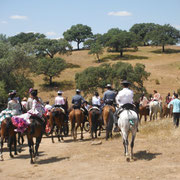 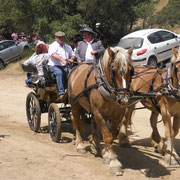 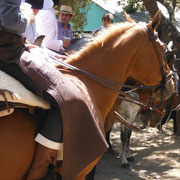 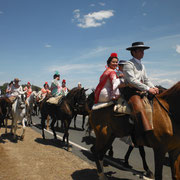 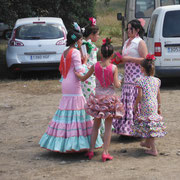 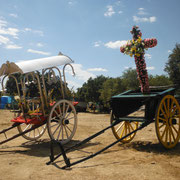