Not only did I join the Guadiana Writers Club, but also the ever growing Guadiana Swimmers Club.

One day I was doing the laundry on the pontoon and not paying a lot of attention while filling a bucket from the tap – chatting with the neighbour – when the bucket tipped over the edge of the pontoon and started sinking and flowing away on the current. Without thinking about the consequences – only that I would lose a nice bucket – I went after it; literally! “Wasn't it cold?” everyone asked me when I told them about it, but I had so many clothes on that the inner layers hardly got wet. And like a cat, my head stayed dry as well! When I went inside the boat to get changed, the captain asked why I didn't take my wet stuff off outside...

Besides that, we were getting wet, or trying to avoid it, quite a lot because the rainy season was in full swing. The Guadiana water level got higher and higher, and often the tide wouldn't turn and just kept on “ebbing”.

Easter came and went and we wouldn't have known it if it weren't on the calender; quite different from Semana Santa as we got to know it in Cartagena two years ago. Sanlúcar let off some loud bangs and Alcoutim had a Festival Doces de Avó (grandmother's sweets): a market with stalls with all kinds of pies, cakes and pastries, and a group of musicians playing traditional music. In the picture you may notice one of the players holding a tube of caña; this was partly split and it was used as a rhythm beater.

On the 1st of April – no joke – we saw the harbour master come walking down agitatedly, to tell us we would all have to move off the pontoon if the water level got 5 cm higher. Well, this was the case within half an hour. We all hurriedly got prepared, undid our lines and motored off to find a suitable spot to anchor. For Eos we decided to choose a place downstream of most of the others, so that if our anchor wouldn't hold, we would have more space to manoeuvre and less risk of bumping into other boats. Yes, indeed, this also meant that if other boats would drag, they could well end up against us. But anyway, a bit further down the river was a bit wider and so hopefully the current a bit less.

And so we were doing anchor watch when there was no wind, a strange experience. Over the VHF we heard people asking for assistence because of dragging or warning the others about an especially big log of wood coming down the river. There being a bend in the river meant not everyone could hear everything, so the boats in the middle acted as relay stations. We heard that on the Portuguese television it was announced that the gates of the nearby dams would be opened in the evening. Just in case of collisions we hung out all our fenders, another strange experience.

Normally, driftwood caught in the chain we undo from the deck with a boathook, or from the dinghy if it is a raft of caña, but now we couldn't reach the end of the chain with the boathook because it was so taut and so used a length of rope with a loop to lasso.

In the evening we huddled outside in the cockpit, watching the GPS if our position stayed the same and seeing how the echo sounder gradually showed more and more depth. In the distance the sky was lit up all the time by lightning flashes and several times cars with blue flash lights passed on the road. One time we heard some loud crashing in the reeds on the riverbank: maybe the wild boar that had reportedly been ploughing someone's garden and goring someone's dog. And all night a nightingale treated us with a concert. A few small boats got adrift, but the scariest was a 30 ton unmanned yacht that had broken its mooring line and came downriver. We heard its progress being reported on the VHF long before we had it in view which made for some anxious moments and it was an eery sight to watch it drifting past, and miraculously it missed everyone.

Around 3 o'clock we noticed on the echo sounder how the water level which had gone up 2 meters since anchoring, now started to show a slightly lesser depth. When it started to rain we decided the situation was safe enough to go to bed, fully clothed though.

For the next five days we were more or less marooned, because the 7 knot current was too much for our dinghy outboard which can do only 4. A couple of times people with bigger outboards came by to bring us some bread and to hear if everything was okay, so we felt well looked after.

This is how muddy the quay of Sanlúcar was after the waterlevel had gone down again:

One time (this was when the current had gone down a lot again but was still strong) we saw a rubber dinghy adrift, so we quickly lowered ours and went after it... and then our engine stopped because I'd forgotten to open one of the valves and then of course it wouldn't start again right away! Meanwhile two other dinghies came rushing and so one could retrieve the one that had got adrift and the other was available to rescue us.

After one week we tied up again at the Alcoutim pontoon. We had missed out on the festival of the Virgen de la Rabida in Sanlúcar, but here are some pictures we took four years ago. 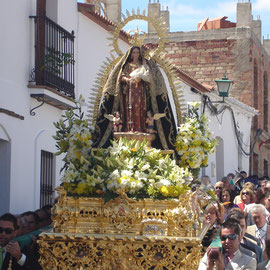 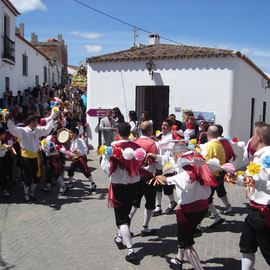