There hasn't been much to write about as we haven't moved about much.


The weather wasn't much either; the first half of May was really lovely, as well as the second half of October, but in between we and everyone complained about it being too windy, chilly, cloudy, rainy etc. and the seawater didn't get above 20º until September.

We didn't move away from the buoy in Faro until July – and then ran aground within the first mile! There is a sandbank to go around and just before we left we saw another boat get stuck there, so after he got loose we cautiously followed, thinking the bank must have shifted and thinking we had to stay more to the inside of the bend – and of course we shouldn't have let ourselved get confused by the other boat. Fortunately it was a rising tide but we spent an embarrassing ten minutes before we floated again. 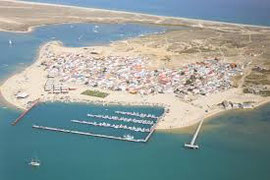 (this view is from North to South more or less)

Eos is anchored somewhere "below" the picture


We spent the rest of the summer at Culatra and we still think it is the best place to spend July and August, when it is too hot, crowded, noisy and expensive elsewhere. We had nice walks on the beach, did the occasional dinghy rides to Olhão to fill jerry cans with drinking water and worked our way through the usual list of boat maintenance. We met several nice people we'd seen before and some new, which is one of the great things of living on a boat. There was a nice French family on a boat staying there for the summer, who sold home made, whole wheat, natural yeast bread, home delivered, which was a great addition to the limited variety of bread to be found on the island.


Culatras highway to the beach: 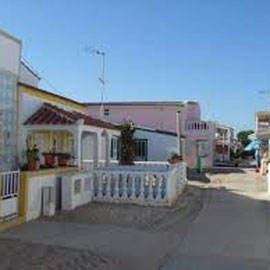 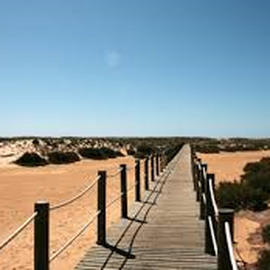 There were quite a few break downs of electric boat gear within a short time. The alternator died and had to be replaced, as well as the regulator, which meant several hours of crouched-down work in the engine room for the engineer, whose back was not happy. Then our fridge stopped working, which was a bit of a disappointment since we'd bought it less than four years ago. It had a 7 year guarantee which isn't much use here in Portugal while it was bought in Spain. I took the ferry from Culatra to Olhão to get another one – we've always had just a small 220V fridge, using up too much electricity but easy and cheap to replace. So back with a new fridge on my shopping trolley, on the ferry, in the dinghy, up the boat, down the hatch, only to find out it didn't work! It would start and switch itself off again after a few seconds. So the next day, fridge on the trolley, in the dinghy to Culatra, then saw I was wearing my old paint splattered crocs, so a quick ride back in the dinghy to make myself more presentable, on the ferry, to the shop, fortunately receiving my money back without problem. On to the next shop, new fridge, on the trolley, on the ferry, in the dinghy.... and that one wouldn't work either! This was too much of a coincidence so the electrician started to do some measuring and found out the inverter gave out 350 Volt instead of 220. So a new inverter was bought, which took a while because our battery system is 24 Volt instead of the usual 12 Volt on boats, and 24V gear usually isn't lying about on the shelf. Anyway, it was some 15 years old, so it had served us well enough. Meanwhile we bought the occasional bag of ice cubes to cool our beer and did some complicated charging of the telephones etc through the laptop connected directly to the batteries, so we were very happy when the new inverter arrived – and relieved the new fridge was working all right on it. 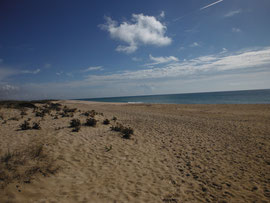 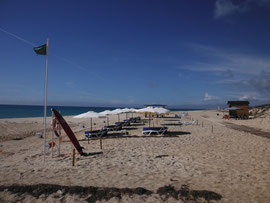 By September we started to think about where to go next and then got offered a berth in the marina of Olhão for the winter! The boat which normally occupies that berth had spent all summer on the hard and had now planned to stay ashore all winter. We could rent the berth from October, after the motor boat that had been using the berth for the summer, had left. That marina is really difficult to get a place in; it is government owned, which shoudn't but does say enough about the way it is run. This one doesn't seem to care about making money because the prices are really low, the spaces aren't filled but they don't let any new boats in. (The Andalucian government-run marinas can't fill their spaces because their prices are too high!) So we stayed put, waiting for the berth to become available, and then, come October, the owner of the motor boat refused to move! Meanwhile there was some reorganisation going on in the harbour office and the authorities wouldn't bother about getting rid of the boat. Anyway, long story, it looked like the berth might become available in November, but we got so fed up we decided to take Eos out of the water and do the yard work now instead of next spring.

So here we are, nicely propped up for a couple of months (as if we hadn't been ashore enough last year) and we'll see what will happen next. 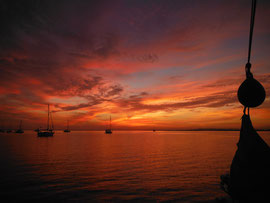 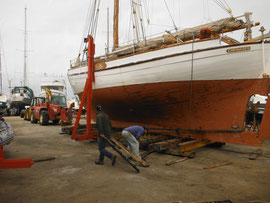