All of a sudden we seemed to have been overtaken by summer, before we were ready to move down to the cooler coast. And the hottetest of all was an overheating engine...

We'd decided to have our mail sent over and this time to the café in Alcoutim. A parcel arrived there within a week, but for the mail in an envelope we were kept waiting and waiting. This time we'd had it sent without a tracking number, so we wished we'd done it differently, but others who were expecting a recommended letter were thinking they should have had it sent by ordinary mail. Anyway, the local postman had decided to put the mail in the café owners post box, who didn't go there for some weeks. (Postmen shouldn't start to do any thinking for themselves.) Oh well, it's all part of the boating life. You can just imagine the amount of coffees, beers etc we spent in those three weeks calling into the café to enquire after our mail. We turned into real pub crawlers; even went to watch the Wimbledon finals, which was really great actually to see on a large tv screen.

The parcel we'd received was with boat stuff from a chandler and one of the things we'd ordered was a handheld VHF. On the Guadiana VHF channel 72 is used to contact other boats (instead of dinghying over) and for a while there was even a VHF Net going at 10 o'clock every weekday morning informing people about the goings-on and giving the possibility to supply or ask for information / assistance / spare-parts etc. Our VHF is situated in the navigation corner in the aft cabin so we don't usually have it on and we thought it would be a good idea to have a mobile one, also as an emergency in case of battery failure. In the manual which came with the VHF we found an orange bit of paper stating: "Addendum – the VHF battery should not be charged when ambient temperature is above 25ºC." Now our thermometer was recording much more than that for most of the day, so how could we manage to get the thing charged? Put it in the fridge? Then the cable would still have to be lead outside. Eventually we took some cold packs from the freeze compartment and sandwiched the VHF between them while charging it. No,no, it's not just for cold beer we have a fridge, it's for charging the VHF!

Varnishing and painting the cockpit was a way to help pass the time while waiting for the mail and to have an excuse to be moored on the pontoon, where it was much cooler in the late afternoon when the sun disappeared behind the hills around 5 PM. Making use of the fresh water supply on the pontoon I decided to wash the settee covers and while taking out the settee cushions I came across a large tangle of cat fur – this must say something about my cleaning habits.

It was getting too hot in the afternoons to be real active and we didn't really do much except in the early mornings. The Spanish lessons had finished and I made an effort to occasionally re-read my notes and work myself through a Spanish newspaper. Music nights continued on Tuesdays – lots of boat people showing off their talents on various instruments (a piano does fit on a boat, i.e. an electric one) and Alcoutim started a summer series of music and dance performances in the square on Wednesdays. The village had prettied itself for the tourist season by washing the statue of the smuggler and adding a few more. 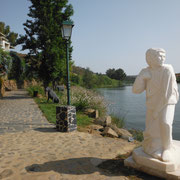 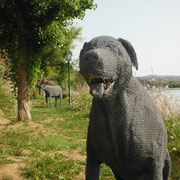 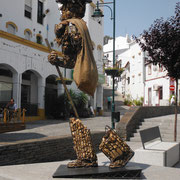 When finally the mail had arrived we started to move southward – and then noticed how the engine temperature got up and up ... and up. Because of the warm river water? We stopped at Laranjeiras where Peter did a series of checks and found that the heat exchanger was quite clogged up but after a clean-up the engine just went on overheating. Changing the oilfilter might help, but could we find the spare one? Or maybe we just didn't have a spare on board? We took the bus to Vila Real, where we were told we'd have to go and search in Ayamonte in Spain. The industrial area there however is quite large and a long way from the ferry quay so instead we took the train to Olhão. We'd been been to a good car parts shop there one time, for fuel filters. Aah, why hadn't we then made sure we had a spare oilfilter?! Well, at that time they had fuelfilters in stock, but this time we had to wait a day for oilfilters to be ordered. So we spent another day travelling on buses and trains, leaving Laranjeiras at 8 and returning after 6 o'clock, but at least we had plenty of time for Lidl, Pingo Doce, Aldi, Intermarché etc. etc.

However, after exchanging the oilfilter, the engine was still overheating. Next on the list was rinsing the cooling system with “desoxydante”. That seemed to help a little, but what really did seem to do the trick was cleaning the water inlet pipe.

Laranjeiras was nice for a change of scenery, but it is rather remote for telephone and internet signals. This year the restaurant in Laranjeiras got wifi and also the “quiosque” at Guerreiros 1 km further down the road.

(One time at anchor away from villages I tried the dongle (a Portuguese one) and got a Spanish signal. At another occasion it wasn't possible to do any roaming but this time it was and so I gave it a try. There was a mention of how much it would cost, but I just wanted to see if it worked. After checking emails and weather (normally using some 20 MB) the dongle supply got depleted by 600 MB! Oops! More than € 8! This was a first and last try, but the phone companies must earn a nice bit from people like me.)

In Laranjeiras there are no shops and even by now we still don't know on what days and at what times the various vans for bread, meat, fish, vegetables etc call at the village. Which meant we sometimes took the bicycles for the 10 km trip to Alcoutim to stock up. Which helped towards our much needed excercising anyway. Inland the early mornings are cooler than at the coast and we made good use of it to do some nice walks before it got too hot. 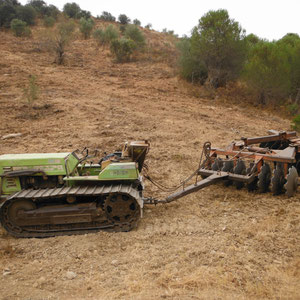 When the hills are steep and rough, you better use a caterpillar tractor 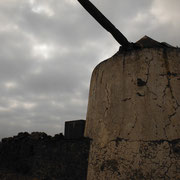 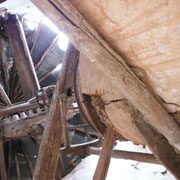 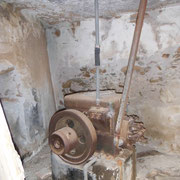 This mill looks really old from the outside but inside it seemed the milling wasn't abandoned so very long ago.

For several weeks we'd noticed lots of dead fish floating up and down with the current in various degrees of decomposition. Some people from a Lisbon yacht told us it was the same in the Tejo and that no one knew what caused it. It got worse and worse and the stench was just, well, real sick-making, especially in the heat and where they'd got trapped under pontoons. Finally, one day several boats with bombeiros and local fishermen went up and down the river collecting them in large dustbins. And the smell of those dustbins! Of course they hadn't managed to pick up all of them, but about a week later they all had miraculously disappeared. 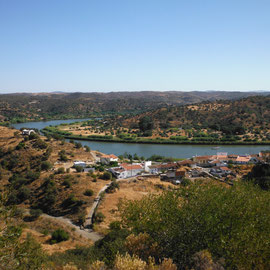 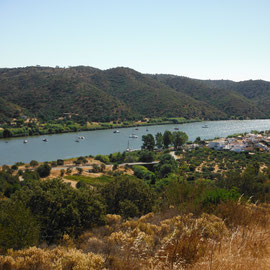