While getting ready to leave, we were finding more and more jobs, and one just lead to the other. This month seemed to be marked by dealing with leaks, however not in Eos herself.

In winter the aft cabin is our garden shed; in there everything gets dumped which is in our way and not in use for the moment. Tidying it back into a proper boat cabin, we discoverd how a bottle of epoxy had leaked onto a bunk, doing funny things to the paint on the wood and leaving a large sticky patch on the mattress. After using every cleaning material available and paint remover as well, the sticky bit eventually disappeared but left a large ugly stain. However, Alcoutim not only gets visited by a bread van, meat van and vegetable van, but sometimes also by a textile van and we were lucky to pick up some material which I sewed into mattress covers.

The last weeks we'd occasionally had to start the engine on the service batteries and recently it really wasn't possible at all anymore to get it going on the starter batteries. After 13 years of doing their duty this wasn't such a surprise and the simple solution was: buy new ones. We organized a lift to Ayamonte to get a new set from the chandler and then Peter started to replace them. At the time when he had built in the original set of batteries he'd wanted to make sure they wouldn't get dislodged in heavy seas and so he'd tucked them away behind the chart table, which now needed to be dismantled. Can't complain really, this being the first time in 13 years the chart table had to be removed. Of course, after 13 years they don't make batteries with the same dimensions anymore, so there was some extra fitting being needed.

Not once during the winter we'd had a look in the locker under the chart table and now we found that some water had leaked into it somehow. The pilots and other papers were safely stored in plastic bags but there was also the hand-GPS, uncovered, lying in a little puddle of water. With not much hope we put it out in the sun, but hooray, after a couple of days the screen got unfogged and the thing was doing its job again.

Another leak was the outboard engine. For some time we'd been baffled by petrol dripping out of it whenever we lifted the tail. So we just got in the habit of not tilting the engine, which isn't really necessary here anyway as we hoist the whole dinghy out of the water alongside the boat when not in use. But when we would be beaching the dinghy, we would need to have the propeller out of the water. Peter finally found that it was caused by a crack in the petrol tank and fixed it with epoxy (of which not all had leaked away).

One day we noticed how the bilge needed pumping an awful lot of strokes all of a sudden. Your mind starts racing then and we could see ourselves out of the water in the shipyard getting a plank replaced. Not so disastrous fortunately, it turned out to be “just” a leaking seawater footpump in the kitchen. (For the landlubbers: we not only have a tap for fresh water at the kitchen sink, but also a tap which gives seawater – or river water of course, through an inlet in the hull and pumped up to the tap by footpump.) Not so terrible because we have a 500 litre fresh water tank but it is just so easy to use seawater to (pre-)rinse the dishes, hands, hair, everything. We decided to get on the bus and try the chandler in Vila Real, which was a good excuse to replenish our supply of peanut butter at the same time. And we were being very good and visited the port captain to pay our Lighthouse Dues: the astronomous amount of € 2, for which we got a certificate valid for one year and a printed and signed receipt. The chandler didn't have a pump, so we ordered one by mail, which we had to first wait for and then install it. Of course, Whale in all their wisdom, had decided to change the model, and again of course, it wouldn't just fit but needed a lot of adjusting.

Besides all that, there is alweays one of the bicycle tyres losing air....

Meanwhile, summer was slow in approaching. It was already June before we changed our winter duvet for the thinner summer one, and ended up a few days later adding a sleeping bag because it got quite cool again. The hills were getting very dry but there were new flowers appearing still. 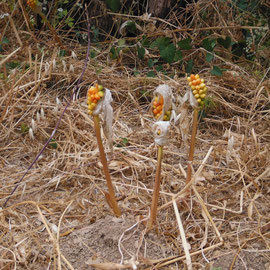 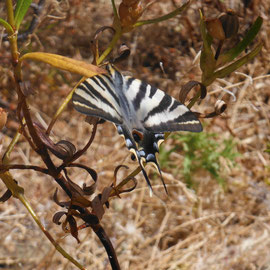 We'll have to go and find them again to see what they have turned into.

This beautiful butterfly was patiently posing for us.

One weekend Alcoutim got an invasion of cross bikes and cars, there must have been a couple of hundred of them altogether, with some of the bikes nicely parked on special carpets. It was a well organized event with everyone starting the race individually and there wasn't a real lot of noise, but we were surprised that the track of the race went right through the village. No idea what they did to the countryside... What surprised us as well was to see how much money there still is with some people in Portugal. 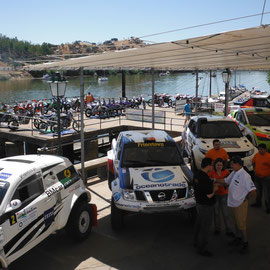 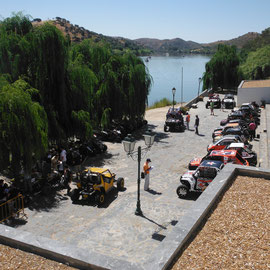 On the 21st of June, the fiesta of San Juan, there was a puppet theater in the library in Alcoutim; a very old fashioned and simple system whereby only the arms can move. A traditonal story was shown about a lady who remarries after her husband is presumably killed in the war. However, he does return after many years and so she retreats into a convent and the daughter, whose father is the second husband, dies of shame. Well, this story is from several centuries ago!

San Juan gives you the opportunity to cleanse yourself of the sins of the past year by jumping across fire. So now I can start again on a fresh load! 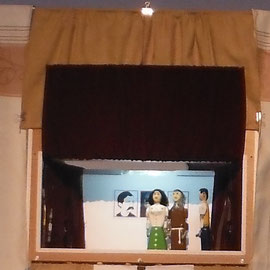 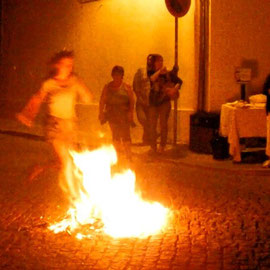