This winter it's been very lively with lots of liveaboards on the Guadiana, but sometimes we feel like being away from the crowd and so we moved upriver to the Vascão and Pomarão for a while. Which turned out to be away from an internet connection as well! Even the phone wouldn't pick up a signal unless we went up a hill.

The Vascão is a tributary to the Guadiana and the anchorage nearby is situated between two bends in the Guadiana so it feels like you're moored in a lake. Being the only boat there makes it even nicer. The area is wonderful for walks and there is a sort of beach to land with your dinghy... well, there was one. The previous time we'd anchored there the landing place had got really muddy because lots of sheep had trampled it. This time there were no sheep, but the mud had got even worse. 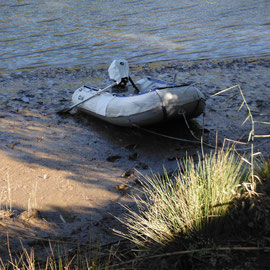 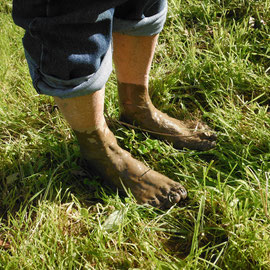 Another thing had changed there: the Vascão had spewed a lot of gravel and we were lucky not to have run aground on the new bank. At high tide it wasn't visible, but at low tide we could see how fortunate we'd been. 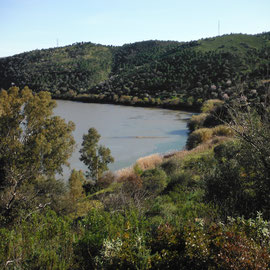 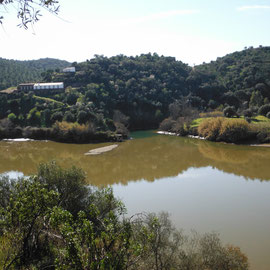 Do we have enough pictures of the boat? No, of course not, let's take another one!

After a few quiet days at anchor we moved a bit further north to the village of Pomarão. The approach is tricky with shallow areas and the first time we went there we ran aground but meanwhile we'd got ourselves organised and well prepared with some waypoints and we got across without any bumping. (And on the return trip we travelled with rising water, just to be safer!) Pomarão is an old mining village with a lot of trade in the 19th century, when big ships came all the way up to load several kinds of minerals. Now it is a sleepy and quiet place. No shops, but visited by several vans with bread, vegetables, cheese and even clothes. It's just a matter of finding out when! For sophisticated things like washing up liquid or toilet paper there is a bus, on Tuesdays, to Mértola. There was a space at one of the pontoons so we had the luxury of not using the dinghy for going ashore. No water or electricity on the pontoon though, but there was enough sun for the solar panels and we made good use of the public shower and the old fashioned washing place. The diesel stove was in nearly constant use, because it was a rather cold couple of weeks with the occasional frost on deck in the mornings. 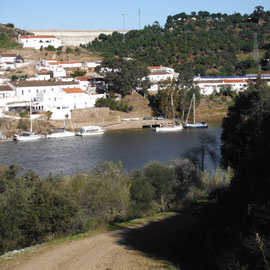 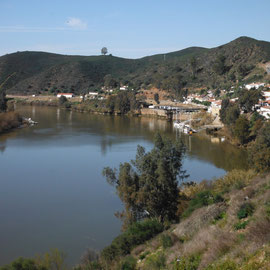 We spent a couple of relaxed weeks there, doing nothing much, but enjoyoing the quiet. The walks in the area were great and the little villages really pittoresque. The hills were lovely green – freshly washed regularly, the almond trees were still blossoming and lots of flowers started to come up. We had the use of only one bike, as one of the pedals had broken off, but on the one still in function I cycled to El Granado, 12 km away, for some shopping. Anyway, for our next visit there we will have some nice bike rides in store. As well as the bus trip to Mértola, which we didn't do because one of the Tuesdays was a holiday and the other Tuesday was awfully rainy. There were a couple of other live-aboard yachts and usually some ten campervans and in the weekends it got quite lively with daytrippers by car or motorbike. We enjoyed catching the late afternoon sun having a beer on the terrass of one of the two cafes. We hadn't been complaining about paying € 1 for a 33cl bottle in Alcoutim, but Pomarão beat it all: 70 cents, and they must still make a living out of it. 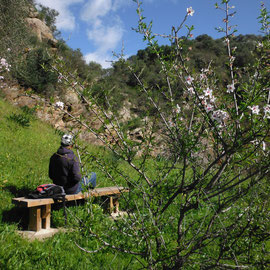 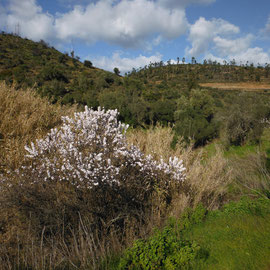 Not having internet was a bit, well, strange. We had the netbook with us on several walks to try and get a signal, and there was a real good Spanish signal in many places, but our Portuguese dongle didn't allow for roaming. In Pomarão and further upstream both sides of the Guadiana are Portuguese, as the border moves further east (or you could say the river moves west away from the border), but even so there was no Portuguese dongle signal. Sometimes I started to wonder about emails waiting for an answer and about what was happening in the world. My imagination got going with visions of nature disasters, atomic bombs and what have you. Of course, if something important had happened, we would somehow have noticed? Would we have stayed longer if there would have been internet access? Would I be having withdrawal symptoms? Or was it because I hadn't done any varnishing for two months?

Anyway, we moved back to the metropoles of Alcoutim and Sanlúcar, nowadays also known as Little Britain, to catch up with shopping, socialising, Spanish lessons and of course internet.