And another month flies past

We had a new dentist appointment at the end of June and until then we loafed around the various Guadiana anchorages, doing some boat jobs and doing some relaxing.

The relaxing got being done a bit more as the weather turned hotter, but the surprisingly cool nights and early mornings made it all very pleasant. Most days were very windy though and we got a bit fed up with sailing over our anchor in wind against tide, the chain scraping the fresh paint of our freshly painted bow. We experimented with a rope and hook on the chain and streaming a bucket or a drogue behind, but with our enormous underwater surface it didn't make much difference. When it got too annoying we moved to the Alcoutim pontoon for some days, and anyway, we had saved up a lot of jobs for which we needed shore power. And we were offered the use of another boat's mooring, which also makes a nice change from having to look out to see if the anchor has dragged. (If we didn't need to leave for the dentist we might have been there still!)

This enormous object visits Alcoutim nearly every Sunday in the summer months, taking up pontoon space and covering the nearby moored boats in exhaust fumes and cooking smells. But it always disappears again after a couple hours, restoring the village's Sunday peace and quiet. 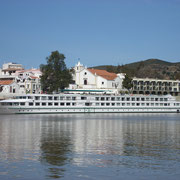 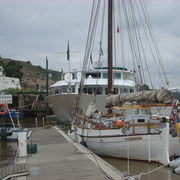 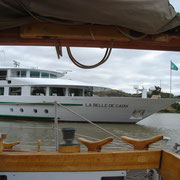 I've been hesitating whether to mention this, not wanting it spoiled by too many visitors, but one of the nicest or maybe The Nicest anchorage of the Guadiana is at the Vascao, a tributary between La Laja and Pomarão. There are two bends in the river nearby, which makes the anchorage look like a lake, and when we are the only boat there it feels just like our own private lake. It's one of the few places where there is a decent “beach” for the dinghy and the walks along the Vascao are really lovely. 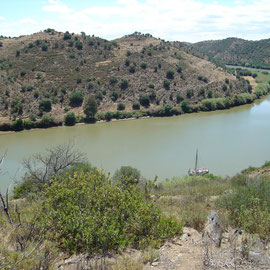 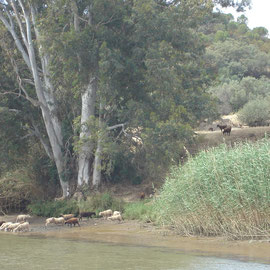 Our landing place being ploughed and manured! 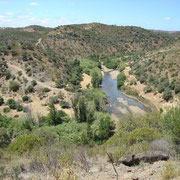 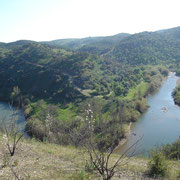 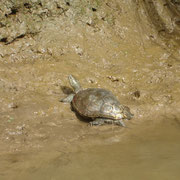 The Vascao at low water, when you can't get your dinghy up very far

The Vascao at some higher water level, and with greener surroundings (this was March)

These turtles can be seen sunbathing on the banks of the Vascao, but they don't go around the corner into the Guadiana itself

By the end of the month it was getting a lot hotter, so we didn't mind too much having to move down to the coast for the dentist visit. We spoiled ourselves with a few nights in Ayamonte marina before the summer rates would start. The EPPA-harbours have had an enormous price increase recently by abolishing their long term low season discounts, but – cold comfort – June is now considered Low season. Everyone is wondering when they'll change the price system again, because more than half of the Ayamonte berths were empty. We've come across this southern style of doing business before: when the number of customers decreases, the prices are being raised.
In three days time we spent more than triple the amount of money we'd spend in the rest of the month! But now we have our liferaft serviced, acquired new flares and a fire extinguisher (all this to keep the Portuguese inspectors happy), did various bike trips with jerrycans to get fuel, various bike trips to the supermarket, filled up with water, did a load of laundry and had some dental restoration work done. We even had time for a bit of sight seeing and this time I had not forgotten my camera, but the thing refused to do its duty! Possibly affected by the salt air, later it was working alright again. But Ayamonte is a very pleasant little town in Andalucian style, so we'll go again someday to get those pictures done.

Instead here some flower pictures taken on one of our walks along the river. 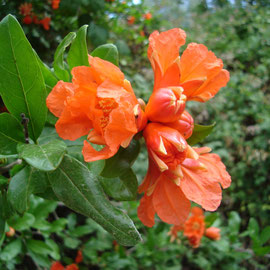 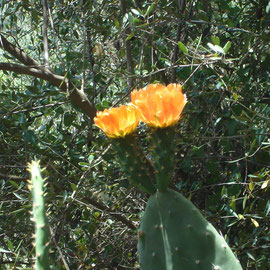