Although we spent much longer on the hard than planned, we quite enjoyed our time there and being among a lot of wooden boats and a nice lot of yard people. 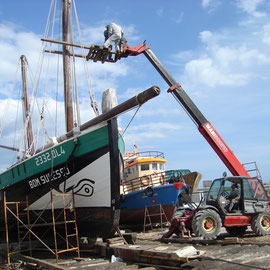 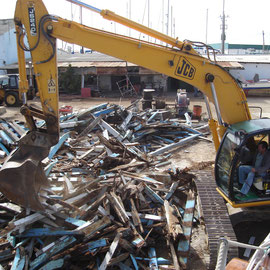 On the Yachting and Boating World forum on internet we came across a message about boats in the yard in Faro being fined for not showing their name and homeport on their transom. We had ours taken off so as to be able to paint underneath so I quickly made a makeshift nameplate.


Olhão itself is a fishing town with lots of old empty neglected houses and it could be improved a lot with a bit of paint. The financial crisis is clearly visible here. But there is a nice waterfront where the big market halls make it very lively. We missed having hills around, but the lack of them made bicycling a lot easier. For a bit of a break we visited Faro and one day took the ferry to Armona, an island in the Ria Formosa. No cars there and it was not even allowed to cycle on the narrow streets. It's a holiday place with small low houses, all nicely painted, neither rich nor garish, mostly owned by Portuguese we guessed. No street names, just house numbers and we saw them numbered to more than 700. Some cafes, restaurants, little foodstores and a simple “bungalow park”, but no discos or tourist shops. A nice place to go for a walk among the low dunes and on the beach. Next to Armona is a second entrance into the Ria, but only to be used with local knowledge, so we had read. And even local knowledge isn't always enough we discovered: a fair sized fishing boat entering at full speed got stuck in the shallows and had to spend some time there waiting for higher water.

The Ria Formosa is a nature reserve and we enjoyed spotting the variety of birdlife. Plenty of storks, white egrets and flamingos along this coast. In the bit of forest next to the yard we saw hopoes and at low water there were spoonbills wading past the boats. 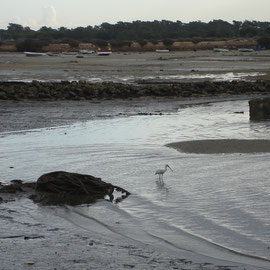 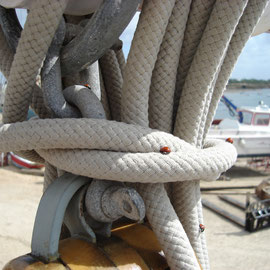 many lady-birds do you count? One day we

had an invasion and I was a bit annoyed with

them getting caught on my fresh paint, but

quite upset when they were still alive and

wriggling the next day. 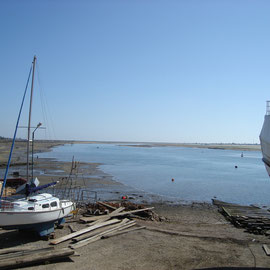 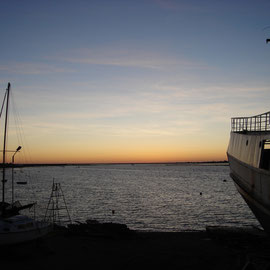 We were quite happy with our parking place right next to the waterfront and the views across the Ria Formosa, but of course even happier when we finally were back in the water again.