What is nicer: being at anchor or tied up in port? Well, we don't like to spend every night at anchor and neither do we want to be spending every night in port. To us it's the variety of doing both which is nicest.

Here on the river, when we're moored at a pontoon, nicely tied up without worrying about dragging anchor, plugged into the electricity, all snug and comfy, we're always a bit apprehensive about moving away from the shore safety and go anchoring. But then, when the anchor is dugged in, and we're relaxing with a cold beer in the cockpit, watching the sunset and all the white herons flying past on their way home for the night, quietly by ourselves without neighbours, life just couldn't be any better.
Then when we decide to move to a pontoon to give the batteries a boost, we are all anxious about ropes and fenders, hoping there will be a large enough space at the moment the tide is going out – but also not when it's running real fast – so we can move alongside the pontoon with our port side, which is the easiest because of our left turning variable pitch prop. And then, when we're all tied up, all the electric appliances set to work on shore power, soaking the laundry, within easy reach of the shops, having a chat with the neighbours, well, that makes a for nice change as well.

However, with summer being over and winter approaching, we were getting a bit fed up with shivering in the early morning fog before the diesel stove got hot enough to be comfortable, checking if we weren't dragging while it was pouring with rain, using up a lot of time dinghying ashore for our shopping etc etc.
Yes, we were quite ready for some more comfort.

For the two pontoons in Alcoutim there is a rule stating you have to move away from the pontoon for a night after having been tied up for a maximum of two weeks in a row. In the first week the rate is € 7.50 per night for boats up to 11 metres and € 10 for longer boats (like us) and in the second week the rates double. On the opposite side in Spain on the Sanlúcar pontoon there is no such rule and there you can stay indefinitely for a flat rate of € 7 per night. So you can imagine the demand for a stay at the Spanish side. Over the weeks we saw a couple of berths with changing occupants, but at first we weren't really interested. When the weather was still nice we preferred to move around a bit from one anchorage to the next with the occasional stay at one of the Alcoutim pontoons, but when it turned so chilly all of a sudden we found that nearly all the boats on the Sanlúcar pontoon would be staying for the winter. Nearly all; fortunately there was still one boat that was going to leave and he called us on the VHF just before departing. And here we are, all nicely tied up for the next months, until we move to the yard.

When we were anchoring we just never seemed to get round to all the many boat jobs, so when we were tied up here I immediately got the anchor and solar panels out of the way to start some painting. Shopping is done real quick with the shop at less than 5 minutes distance, instead of ferrying everything by dinghy. However, we still go over to Portugal occasionally where we prefer the bread, to pick up a wifi signal and for the Friday night yachties get-together in the pub. And of course it's nice to get the fan heater going first thing in the morning when we're enveloped in a chilly mist and to be able to get off the boat easily for some much needed exercise.

….until we have to move the boat away from the pontoon because of flooding due to heavy rainfall. Which is one of the hazards of this river life. Anchoring here has its surprises, we've found out a couple of times: 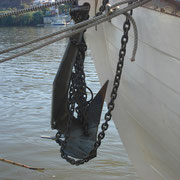 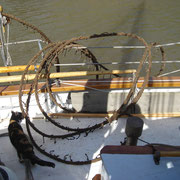 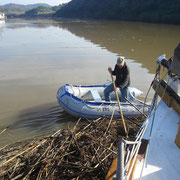 net used to be attached.

But as long as there is no flooding, no nasty debris bashing into the hull, no collisions with boats dragging their anchors, we're comfortably tucked up for a while.