Cádiz – Finally at anchor, but not for long

Continuing after Barbate one has to pass the famous Cape Trafalgar with its many shoals. The saying is “En Trafalgar o muy a tierra o muy a la mar”: pass either close inshore or far out at sea. We had done the inshore passage 2 years ago going southwards and I had been very impressed, not to say a bit scared, about the rollers on either side of us, so on my special request the captain forwent a bit of adventure and we did the boring around-route.

We had been anxious to find out if our anchorage from two years ago, south of the harbour of Cádiz, would still be accessible or if by now the new bridge that was being built would be obstructing our passage. But the bridge is still nowhere near completion and we could aim for our previously used waypoint. After so many disappointing experiences we were wondering how long it would take for some official to turn up to turn us away, but there were so many small holiday fishing boats anchored around us, even at night, that we started to feel sure no one would bother us. The area is nothing special, a view on the boring part of the city and a lot of industry, no mountains in the background, but it is a reasonably well protected anchorage with plenty of swinging room. And we were just happy to be at anchor again.

On the weather forecast we saw a big southeasterly gale announced for the weekend, so we planned to run for shelter in time. We wondered if we could spend another night at anchor before it would start to blow and wanted to check the forecast in the afternoon, but the open wifi signal we'd used in the morning had disappeared in the afternoon and right then I ran out of dongle time. So we decided to play chicken and go into a marina straight away instead of maybe having to manoeuvre in rain and wind the next morning. Plenty of options in the bay: El Puerto de Santa Maria we would have liked to visit as we hadn't had a chance before because there had not been any space then, but for this weekend we saw on internet they had a nautical fiesta going. Rota we also hadn't seen yet, but would be a bit exposed to a SE'ly. Puerto Sherry would be costing us more than € 50 and is a long way away from any town. We opted for the marina of Cádiz, where we had been before and where we knew the visiting pontoon is in a location designed by someone at a drawing board in an office and can only be reached easily by fin keeled boats with a bow thruster and so we tied up into the first available berth. Of course, with hindsight, we should not have been so lazy not to move further inside....

We had really enjoyed Cádiz on our previous visit and now we did so again. Many narrow streets with high buildings always offering some shade, every street and house a little bit different from the next, beautiful courtyards we could sneak a peek into, wonderful colours, smells of cooking, people socialising on the streets, or on their way to the beach with chairs and parasols and coolboxes. And many wonderful squares in between, small or large, most with lots of shady trees and cafés. We could just walk for hours and hours.

But we also had to spend some time on the boat, adding some extra lines, in case a cleat would be ripped out by the contrary motions of boat and pontoon. Sand was flying everywhere and I got totally soaked with salty spray standing on the end of the finger pontoon adjusting the lines. And it went on for nearly two days. We know there is always the August Dip, but this was a lengthy one, with gusts of 50 knots. And hot! The wind must have come all the way from some African desert. After the wind finally shifted the temperature dropped from 35º to 25º real quick, and – not having eaten a lot when it was so warm – we immediately got hungry! 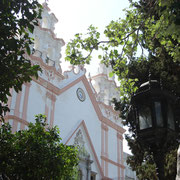 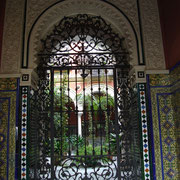 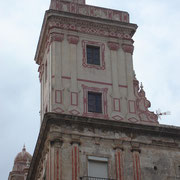