So what do you do in a tourist place while waiting for the wind: play tourist.

In October 2009 we had fallen in the middle of the fiesta of the patron saint of Fuengirola: processions with elaborately decorated statues and lots of beautifully dressed up people and horses, all very Andalucian and everyone having a good time. We happened to walk along with a group of elderly women who were stopping every few minutes to dance the Sevillana, accompanying themselves by singing and the famous and wonderful Spanish way of clapping their hands. There were plenty of tourists about, but it was all very much a Spanish happening and so we quite got to like Fuengirola.

And this year another fiesta was to be held the very next day we arrived: the fiesta del Virgen de Carmen, the patron saint of mariners. So in the morning we set off into the town, armed with camera and plenty of cold water so as not to go thirsty, in search of the procession taking the statue of Carmen to the sea. After some time we found the tourist office, but it was closed because of the fiesta. Finally we came across a notice stating the procession would start at 20:30! By that time it's nearly getting dark, so we hang around the end of the pontoon, waiting to see Carmen being sailed out to sea.

Even though Carmen turned out to be real small, she was in a large company of celebrators. And the fireworks afterwards were really good. We had seen some fantastic ones in Spain over the years, and nearly started to find them boring, but this one deserved a place in our Top list.

Fuengirola is very obviously a place for the low budget package tourist and it has lots of cheap eating places for the pink and white tourists who like to stick to their own country's menu. But as the town has no pretensions to be of any higher standard, it's quite a nice relaxed place to be.
And there are plenty of possibilities to get away from the place for the day. When we were here before we had used the very good train service to Málaga and visited the Picasso museum, which we enjoyed a lot.

Now, while waiting for the wind to turn again, we took the bus to Mijas, a short way inland. Mijas is quite a tourist trap, with donkey taxis and many leather and arty shops, but despite the many day tourists (like us!) it still had a nice atmosphere and the setting in the hills is really pretty.

Another day we went to Estepona, for some boat shopping, and on the bus we got tired of seeing all these billboards for steakhouses, real estate agents, garden centres, wok places, furniture stores and all kinds of other things of no interest to us, but you can't help wanting to read all these signs. The whole coastline was one continuous stretch of houses, villas and apartments, though none real high. Later, seeing it from the water, it looked much better with the high green and unspoilt hills behind it. In Estepona itself we didn't find anything worth going back for: the area around the marina is very sterile and the old centre itself is just nothing special.

We had heard different opinions about Ronda, a mountain town some 80 km away, ranging from indifferent to very very nice, so we decided to see for ourselves. And so on another day, still waiting for the wind to turn, we looked up the bus time table and settled ourselves at the bus station waiting for the bus to Sevilla, which was the one stopping at Ronda. Having had to wait half an hour for the bus to Estepona the other day, we sat around patiently. Watching all the different kind of people around us we didn't get bored quickly. But after an hour I thought I'd better ask.... and was told the bus had gone with a delay of only 10 minutes! Well, we never saw a bus with a sign for Sevilla and never heard an announcement for Sevilla, but we had kept a good lookout because the “station” is just 2 bus stops along the pavement where they double or even triple park, and we're not really inexperienced public transport users, but still we had got it wrong somehow. For the next bus it was getting too late, and so we went back to the boat and I spent the afternoon on internet trying to find out how to get to Ronda from Gibraltar, La Linea or other places along the coast. There is something to be said for fully organised package tours! 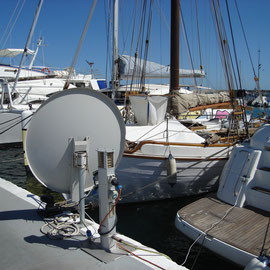 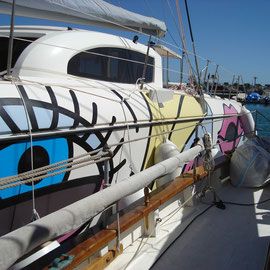 One neighbour we didn't see on deck all day.       Our other neighbour was very artistic. Makes a