And what do you do all day?

I'd been on the look out for bitter oranges and saving empty jars these past couple of months for making marmalade. Last year I'd missed the opportunity; just didn't come across any. I did see them one day, sitting in the bus, watching the park maintenance guys cutting the trees along the street into neat squares and then noticing lots of oranges amongst the chopped branches. So too late by then.

And so this year I had kept my eyes focussed and did find them, in a street here in town. Can only guess what the Spanish were thinking seeing these foreigners picking inedible oranges. No one kind enough to point this out to us though.

Hours of slicing up orange skin, interrupted by some bilge cleaning because I'd dropped an orange which rolled into one of the many gaps between floor and furniture (ventilation - wooden boat) and then had to lift some floor boards and then couldn't really put them back again without cleaning up all the cat hairs, bits of food and what have you. I'm always a bit wary groping around under the floor, never knowing if the cat might have let a mouse escape which I would then find squashed between my fingers. Well, I was rewarded with the find of a 50 cent coin, although taking the rust off it also took some time.

And the other reward of all that work was 7 jars of marmalade! 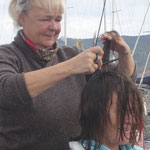 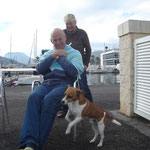 Swedish Lena is not a professional, she said, but what she did looked really professional and I was very pleased with the result. She had her "salon" on the quay one day and treated some of us to a really good job. And of course it was very pleasant to have your hair done outdoors on a nice mild day in January.

With a forecast for some rainy days I dug out the sewing machine and started on a long list of sewing chores. Making a new cover for our mattress turned into a full day job: after several broken fingernails and sweating and swearing for half an hour trying to get the mattress into the thing, I had to admit the stitching was all twisted and so I undid it all, re-cut the material and sewed it up again. But then it fitted perfectly.

I shortened some trousers into shorts, stitched a new dinghy cover, repaired some flags and as the weather forecast is improving and sewing isn't one of my favourite jobs, I'll probably save the rest of the jobs for, well, yes, for a rainy day.

Won't say too much about this, but when a batch of mail comes in there is always an annoying day replying the bank people, insurance people, tax man and other such species of the human race who seem to think we are there to keep them in a job and so invent all kinds of annoying ideas to annoy us and as writing this makes me annoyed again, I better stop writing about annoying things.

And what did the captain do?

You will see shortly on the other website: nice drawings of Eos´ ground plan / floor map.

(? Mr Google Traductor wasn´t sure either). 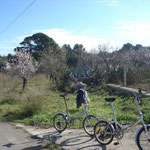 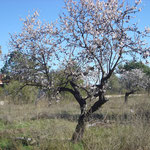 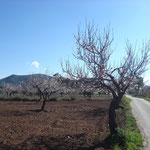 Nice weather for a cycling tour.

On another occasion we had walked around the bay on the West side of Cartagena and seen how lots of people were walking or cycling up the hill there despite a notice saying Prohibited military area and so we thought we could do some tresspassing as well. We took our bicycles past the rusty Prohibido sign and around the gate where it was obvious many others had done so before. However, halfway up the hill a car with two military guys stopped beside us and told us what we really knew already. We suppose we were just unlucky to be there on their cleanup day, but of course we can't try going up that hill again, they'll certainly remember those foreigners on their folding bikes.

So instead we went for a tour through a very rich suburb with lots of nice houses, all with a Security sign and many with a guard dog. Living in such an area can't really be fun with these barking dogs, one setting off the next one all the time.

The almond trees were just lovely to see. They had only just started to blossom a week ago, but now some of the blossom was already getting obscured by new green leaves.

We came across a real bicycle path, even prohibited for pedestrians, all of 2 km long, but the cyclists were outnumbered by far by people jogging or walking their dogs. Lots of people with (Nordic) walking sticks we saw, but all just carrying them in their hands, some even jogging with them. And we saw someone on a bike without a helmet!

And so, that's what we do all day.